It’s about the journey AND the Destination 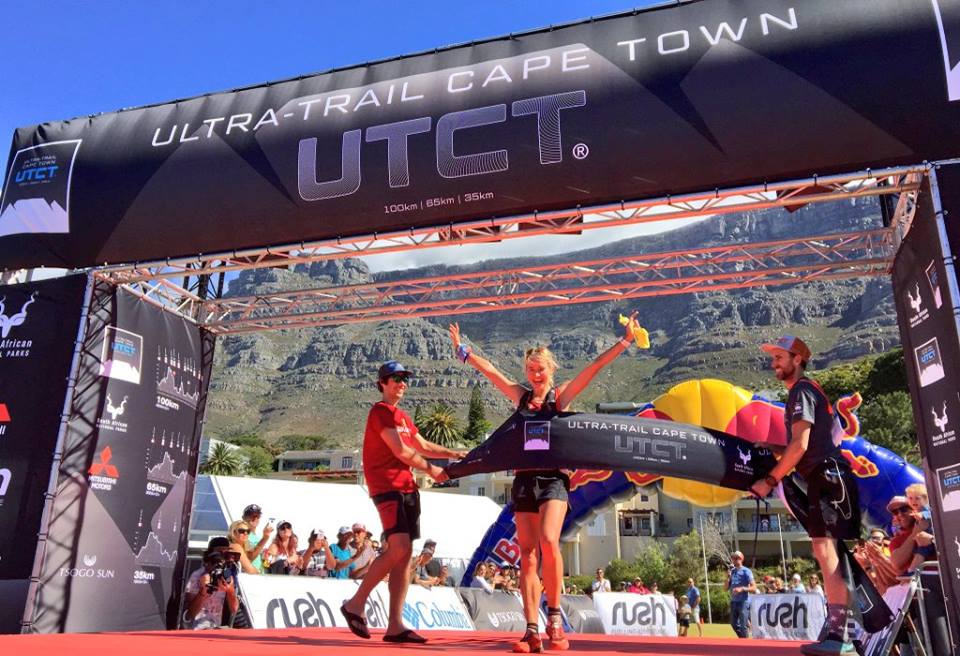 On Saturday 10 December, I toed the line for my last contest of the season, and with that, quite a long season. It was finally time for the Ultra Trail Cape Town 100km. I have been wanting to add this one to my resume since Christiaan won it October last year and I had to settle for the 65km due to racing the Transalps 270km 8 day stage race in Europe the month before. The 100km is after all the big carrot and I badly wanted to have a bite at it!

To get to the start-line for a race this late in the season feeling relatively fresh, injury-free and motivated was quite an ask and for me getting there, was a huge blessing.

To quote Kim Stephens: “The global interest in UTCT is at an all-time high, with it being included in the 2017 Ultra-Trail World Tour. This really defines it as the premier ultra-distance trail event in South Africa. With 1000 runners from 40 nations participating in 2016, I can only imagine the diverse field in years to come. The event is made up of three tough races which include 35km, 65km and 100km routes.” The 100km is arguably the most challenging, not only because of the distance and elevation gain, but also due to the strict cut-off of 17hours. 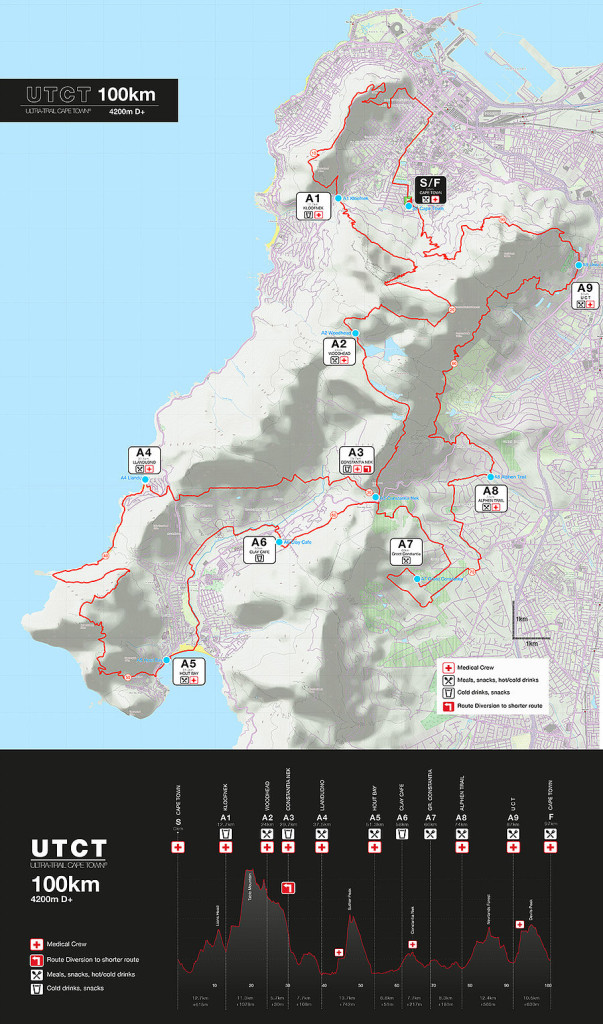 The race starts at 4am from the Gardens Tech Rugby Club just below the slopes of Table Mountain. With flares and some pretty emotional music, around 500 odd runners headed off into the city lights of Cape Town. As we approached the climb around the lower contour of Lion’s head, the morning light dawned and it was time to stow the headlamps.

I was happy to be welcomed as the 1st lady at Kloof Corner, the first checkpoint of the day, where Christiaan was eagerly waiting for me. It was special to run in our back garden, the striking Table Mountain, a famous 7th wonder of the world. The contour path around to Platteklip Gorge is always tough under foot, but with beautiful city views. The climb up Platteklip is demanding, but once at the top, you are rewarded with a beautiful trail that hugs the edge of the mountain with breathtaking vistas, all the way to the highest point at Maclears Beacon. From here on a tantalizing, technical, scrambly descent takes you to the second aid station at the dams. The volunteers at the aid station called me up, without realising I didn’t need to stock up as I had planned to skip and go straight through to the next aid station at Constantia Nek. After a slight detour I made my way down the bloodcurdling single track and stairs to the Nek. 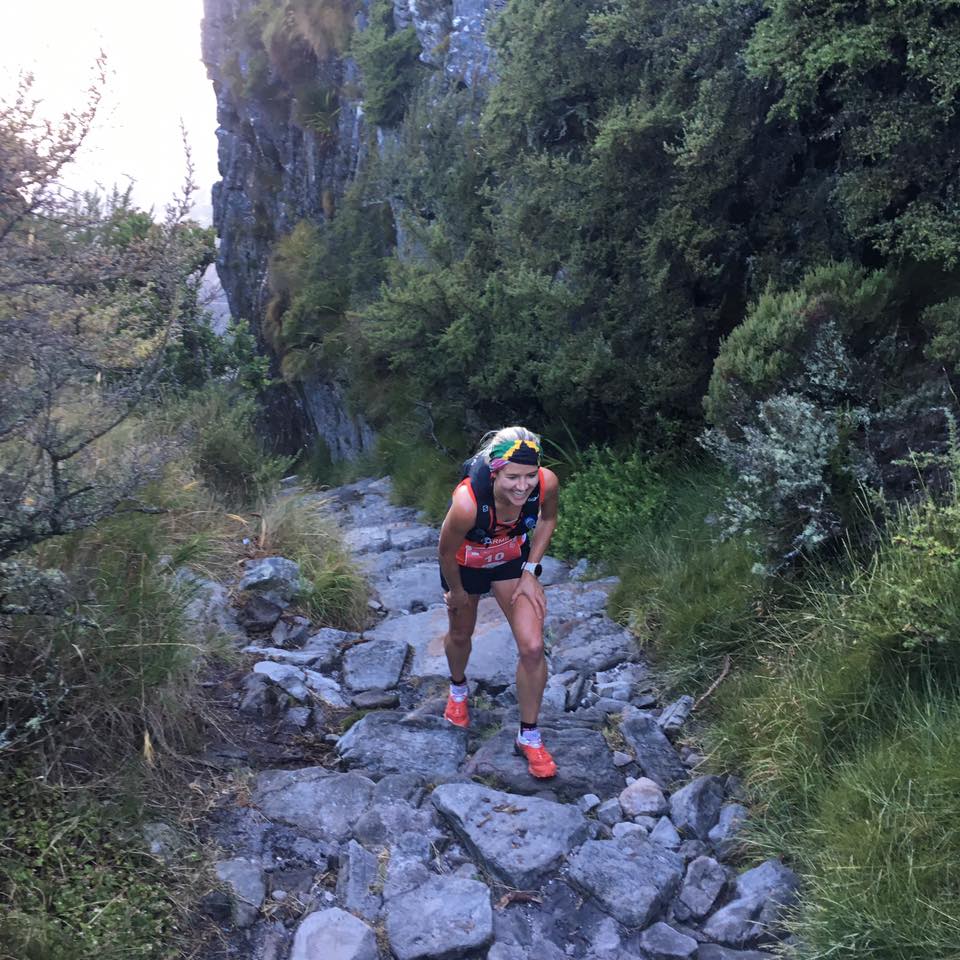 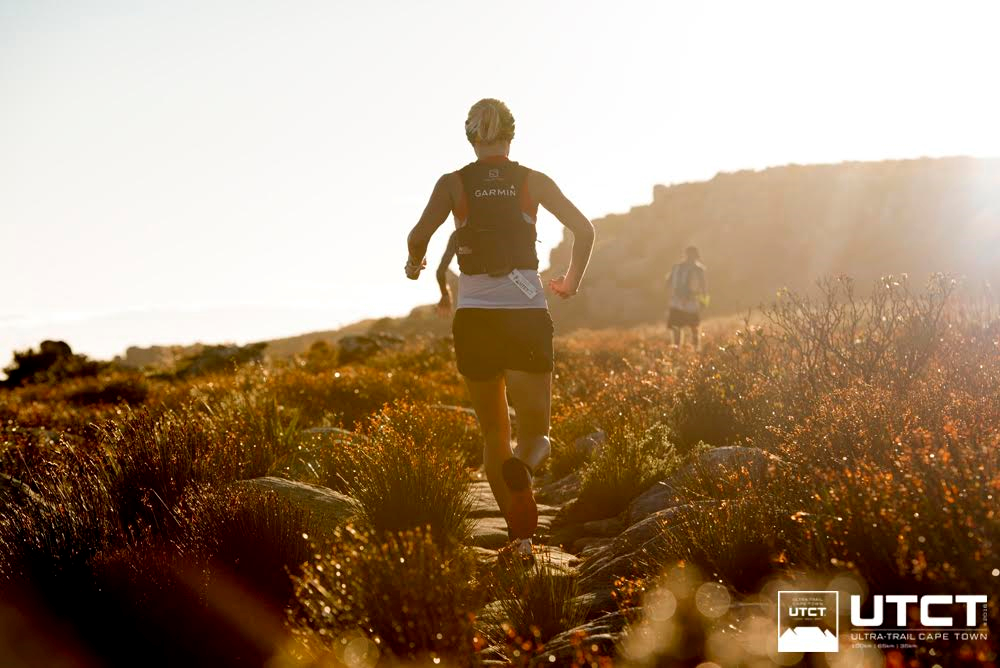 Apart for an unhappy stomach (which is very unusual for me in a race), I was having the time of my life and felt cheerful as I ran towards Christiaan at Constantia Nek, ready with all my goodies for a smooth transition. Along the gorgeous Orange kloof section I took a slight tumble, I suppose to keep me humble, or as a result of gazing at the beauty too much! My stomach did not let up and to my frustration, I had to deviate from the route.

Up next was the Llandudno aid station and I was thrilled to see Christiaan, teammate Kerry-Ann Marshall and good friends Paul & Philippa Burger there. Another quick changeover and I was off to one of Cape Town’s most pristine beaches. The trail is heavenly, with a mixture of beach running, sandy sections, rock-hopping and a big climb to end with. It was on the rocks near the shipwreck that I caught up with one of the front-runners, Bennie Roux. Having run on my own for most of the day, I welcomed the thought of having some company. Unfortunately Bennie didn’t feel great and soon I was by my lonesome self again. The Karbonkelberg climb was as expected; brutal and in the blistering sun. Luckily I was mentally prepared for it. On the way to Houtbay, I passed two other front-runners, Nic & Pedro, more evidence of just how harsh this course is. 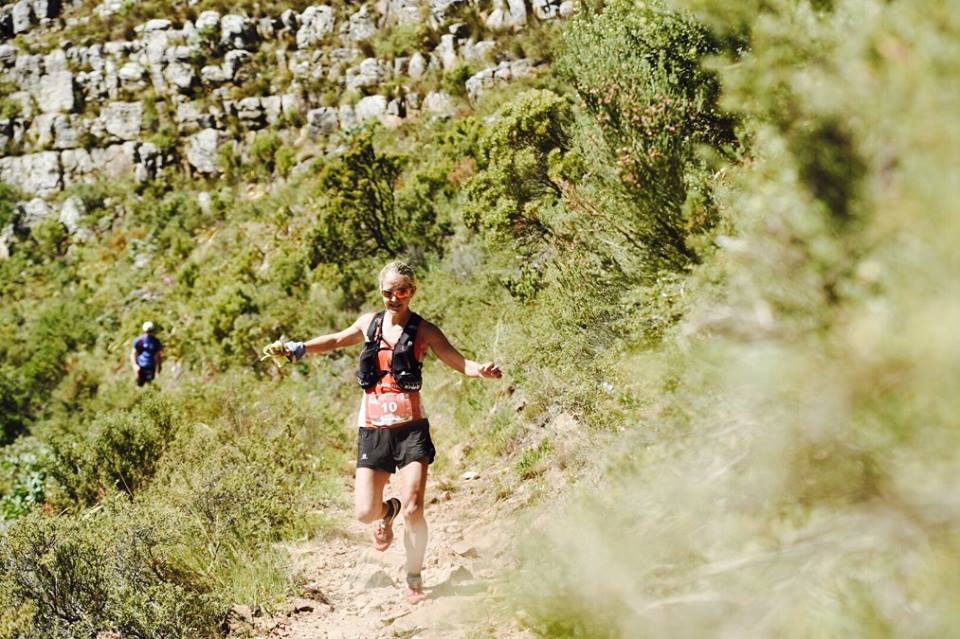 At the Houtbay aid station I was encouraged by more Salomon teammates, Linda Doke & Ryan Sandes along with many other enthusiastic supporters. Some more super seconding from my hubby and off I ran to the beach, chirping race commentator Doug Bird & his Gopro.

The next section passed in a haze. I really took some strain here and my stomach was now at its worst. I struggled to take in food, and was on the hunt for ablution facilities once more. I managed to suck on a Crampnot Gel, which seemed to be ok. I retreated into my own little world, recalling some happy memories, a great coping mechanism for me on an ultra. What felt like days, another pit-stop and a wrong turn later, I finally heard the sweet sound of Imagine Dragons “I’m on top of the world” (my song request to the amazing Trail & Tar volunteer team) as I ran into through the vineyards into the aid station at Groot Constantia. Somehow I managed to feel on top of the world again. I also took an Immodium (which had been in my pack since the start…) and that seemed to calm my belly.

Next stop was the Alphen Trail, with plenty of motivation along route from people enjoying strolls with their doggies. As I reached the aid station, I gathered Christiaan didn’t make it there in time. I wasn’t too phased as the stations were stocked with almost anything one could ever wish for on an ultra. I felt sorry for Jock Green as I saw him sitting under the tree, taking some serious strain. I was happy to hear that he pushed through and still finished in 7th position – what a fighter! Kane Reilly and Ryan cheered me on and off I went to the most difficult 23km of the race, a collection of trail that swings from easy trail to technical rock maneuvers, slippery boardwalks and an endless number of stairs. 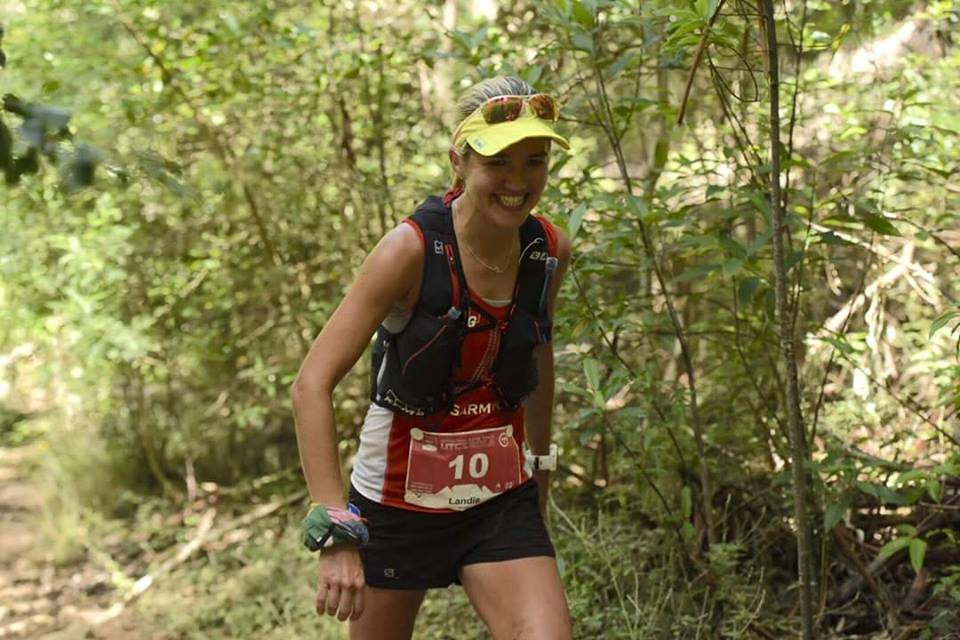 Eventually I was swinging my way from branch to branch down to the UCT Tennis Club. Both Christiaan and my good mate Nicky Collins, along with some family, Michelle and Ralph, as well as UTCT race director, Stuart was there to welcome me up the stairs. Having that kind of support is priceless! Some ice cold Peptosport and another Crampnot gel, and off I went for the last 10km stretch. 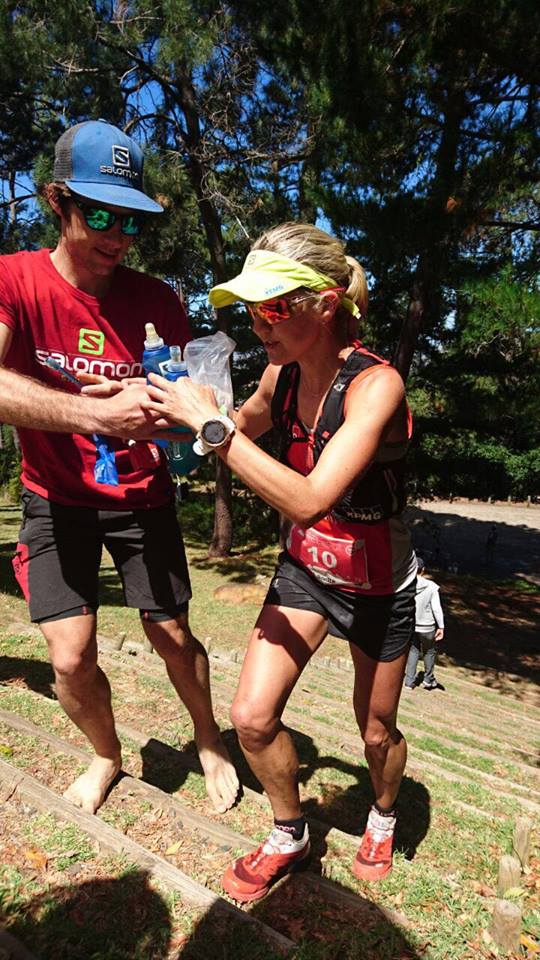 The sting in the tail, the sharp climb to the Blockhouse, was imminent, but I was determined not to let anything wipe that smile off my face! I passed some more of the 65km runners (including UK visitor Andrew Cooney) and after an exclamation of: “what were they thinking??” I motivated them (and myself!) with some words of encouragement. That climb was never-ending and took every ounce of energy I had left. I was broken. I inspired myself with finish-line thoughts, prayer, thoughts of Christiaan, my family and all the hard efforts I underwent to get to this point in my life. I pushed on and finally reached the turn-off to the final 3km downhill. It ain’t over till the Cape Cobra sings and I narrowly escaped an encounter with a big one who made his way across the rocky jeep-track. At least the adrenaline was pumping even more and I sprinted to the finish area.

I began to hear the familiar sound of the MC’s voice and my dream of becoming the UTCT 100km champion was starting to feel real. That finish line feeling was precious. A sense of immense elation and relief overcame me as I broke the tape held by Christiaan & Stuart. The journey AND the destination was completed – a special moment, a successful finish to a brilliant year. What a blessing!

Everyone was there to congratulate me and it was an honor to be supported and celebrated by so many wonderful people.

Congratulations to the inspirational Sally Mcrae from the USA for her 2nd position and the lovely Naomi Brandt for her 3rd spot on the podium.

I am in awe of each and every participant who finished this race. It was incredibly tough and you each deserve to feel very proud of that coveted finishers medal. Bravo, you are now UTCT heroes!!

Also hats off to Rory Scheffer and Meg Mackenzie for winning the 65km race.

A big thanks and congratulations to the UTCT team, Nic Bornman, Stuart McConnachie, Kim Stephens, James Hallet, Sue Ulyett and all the volunteers and marshals who helped orchestrate this masterpiece. A job marvelously done. 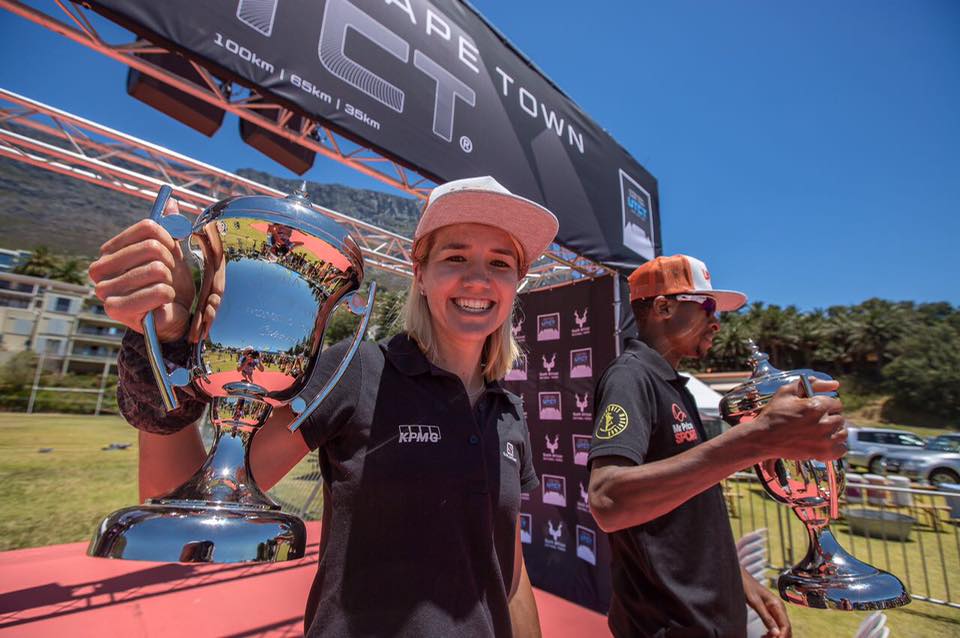 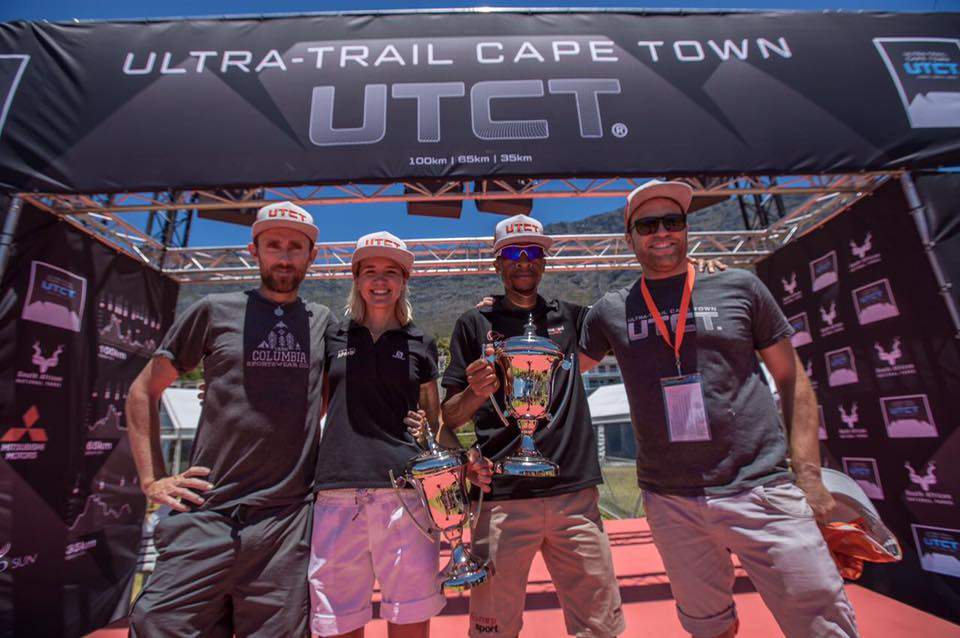 To my fabulous seconds, Christiaan Greyling and his little helpers (Nix, Clinton, Gerhard, Kez), to my sponsors and partners (Salomon, KPMG, Garmin, Buff, Peptosport, Best4sports, Hazz, Superfoods, Buttanutt, Iamsuperbar, Extremelights, Runstrong, Compex, Activepatch, Humanscale, Endurocad), and to all my supporters and fans: without you guys, my dreams could not come true! 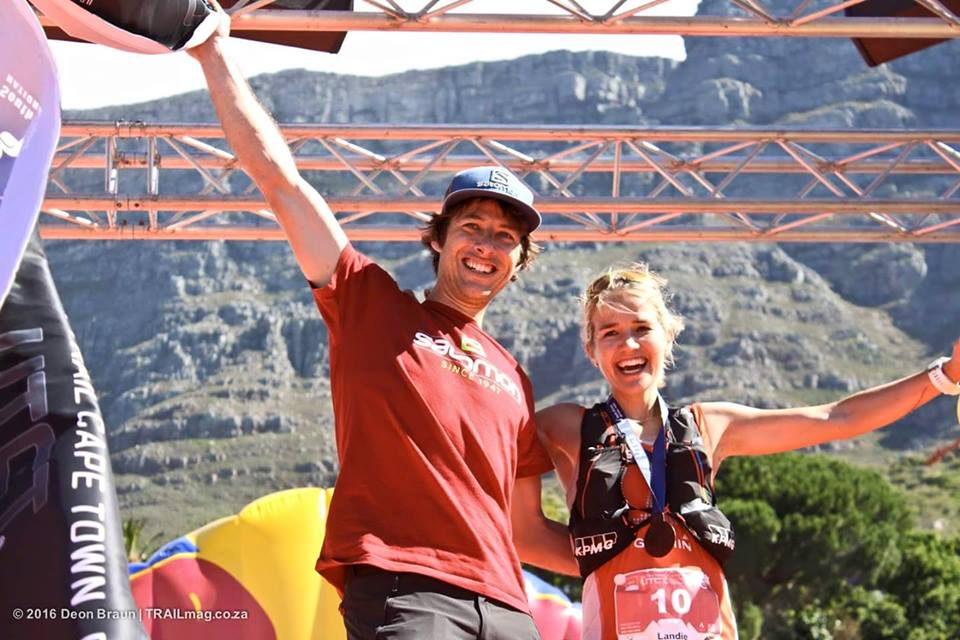