A tale about the Otter 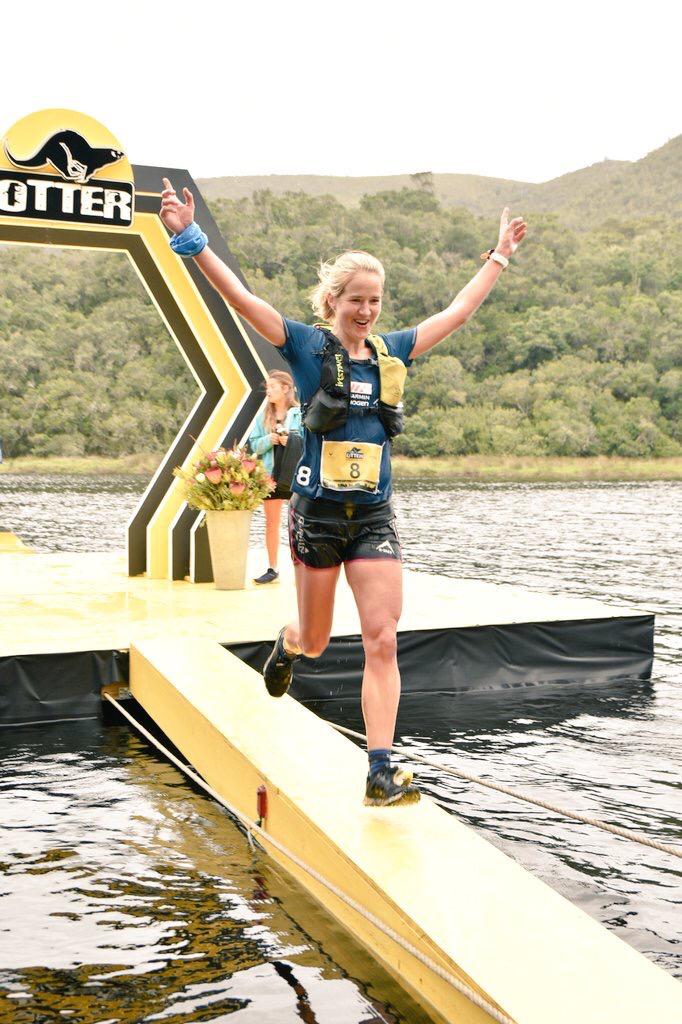 After missing one of my favorite events 4 years in a row, the hunger to get back onto the Otter trail was definitely real.

However, as any good old fairytale would have it, there were a couple of villains that tried to ruin my journey to get onto that coveted start-line.

Since Christopher’s birth a year ago, I managed an impressive comeback, with a 2ndspot at the SA Champs at the end of March, when he was 6 months old and a 5th place at the renowned Penyagalosa Ultra in Spain. And then, just as I felt like I was getting back to my best form yet, I tore two ankle ligaments at the end of May at the Jonkershoek Mountain Challenge, somehow still claiming the top spot in the women’s race.

I was heartbroken as this meant 6 weeks of absolutely no running during what should have been a crucial building block for my main goal for the year, the Otter African Trail Run. There was nothing I could do but be patient, take several deep breaths and do as much rehab and cross-training as I could. I tell you, there were some particularly dark Winter’s days, which had some red wine & feeling sorry for myself in front of the fireplace involved ;-). I seriously had to convince myself why I was doing this. Especially with baby Christopher in our lives, I was questioning whether it was even worth trying to still be a competitive athlete.

I could finally start running during the 2ndweek of July, but literally on a grass field alternating between walking and running for two weeks, followed by another two weeks of being limited to jeep track/road running.

It was only in August when I started running on trails and had to be very cautious as it takes months for the ankle ligaments to get strong again.

September was a good month as I got a good block of training done and managed a win at the Table Mountain Challenge, my one and only long run for the Otter.

And then it was October, which is a super busy month for the Greylings. We helped organize the inaugural Maxi Race Cape Winelands in the first weekend, which resulted in very little sleep and a lot of hours on the legs. The following weekend was Otter, followed by a trip to Turkey for Christiaan and a family trip to race on Rodriques Island at the end of October.

Fortunately with being so busy with organising the Maxi race, I had very little time to think about the race too much. But then, suddenly, it was two days before the race…

Nerves!? Heck yeah, there was plenty of them!! I mean who wouldn’t be nervous if you’re lining up against the likes of Nicolette Griffioen, Toni McCann and Bianca Tarbaton..!

The inner battles nearly defeated me. Sometimes you become so focused on the result that you become tense and anxious when faced with pressure situations. Because, lets be honest, I love being competitive, winning and being my best.

But I also know that “victory” is never certain, and if it comes, it’s usually the result of your inner victories. No matter how much you try to convince yourself not to worry about others and their expectations of your performance, that is always one of the biggest inner battles to overcome, especially if you have partners and sponsors who believe in you.  To overcome this, I tried filling myself with my own expectations of being courageous, fearless and calm, but excited for what lies ahead! I realized that the only things I can control are my preparations, emotions, attitude and effort. It certainly helps to keep calm and relaxed.

Sleep didn’t come easy the two nights before the race, as little Christopher picked up a cold and woke up several times during the night. I was once again reminded of the challenges of being a mom; it will always be my first priority over being an athlete.

But when the alarm finally goes off, the feelings of excitement are overwhelming. Multitasking between munching my Wazoogles oats, rolling my feet, anti-chafing the potential hotspots, the familiarity of it all reminded me why I love this so much.

The uneasy laughter and buzz on the bus on the way to the start at Stormsriver confirmed the significance of this race.

The Otter race format is in the form of batches, determined by the prologue the day before the race. The Abangeni (consisting of the first 20 men and women) starts first, followed by the rest of the field, set off in batches of 16 every two minutes.

The startline rituals of warming up and tying my shoelaces for the 100thtime against one of the most incredible backdrops and excitement in the air was another confirmation of how much I treasured the entire racing experience.

Suddenly, it was time! The bell rang and after dibbing your timer into the dibber, the chase for the single track was on. The Otter trail is mostly a single trail, so if you get stuck behind slower runners, overtaking is not a simple task.

I bolted off after racehorses Toni McCann and Bianca Tarboton. This first section is extremely technical and concentration levels are at its highest. I could still see them until Ngubu hut, the first checkpoint. Soon after this I realized this pace was slightly faster than my current fitness and conditioning post injury allowed. I settled into my own rhythm and was soon joined by fellow K-way athlete, Nicolette Griffioen. We ran together in 3rd& 4thposition for about 5k or so, when I felt strong and broke away on of the climbs. Up until the halfway point I felt very strong on the ups and downs and sincerely enjoying every step of the way.

The conditions out there were hot and humid and a proper refuel was necessary at the “munchie point”. I struggled to find my rhythm on the 10km section between Oakhurst hut and Bloukrans. The trail is not particularly demanding, but I would say that this is one of the more technical sections of the route and my lack of specific trail conditioning became more evident. I knew I just had to grit it out and that hopefully the cold water swim at Bloukrans would give me new legs.

Finally I reached the stairs that lead to “new-leg-haven”, but not without a quick tumble on the green mossy rocks while appreciating the welcoming cheers from the Bloukrans supporters and good friends Melissa & Ruan.

Jacques Marais, the maestro behind the lens, informed me that I could still catch Bianca (in 2ndplace) who was about 10mins ahead of me. With renewed energy and eagerness to give it my all on the day, I ran the next 10k as hard as I could!

Eventually, I reached the final beach section feeling at my strongest, but without Bianca or Toni in sight. With less than 3km to go and never losing hope, I took a sip of my Coffee flavored Biogen gel to give me one last push to finish.

And then, out of the blue, I saw Bianca. She was walking, assisted by fellow runner Tim Chambers and I could see she was taking serious strain. I offered help, but realized that it was probably too late. I was now running in 2ndposition and as I reached the river and caught a glimpse of the floating bridge, I was overcome by emotion and almost couldn’t hold back the tears.

I succeeded with a flawless balance beam crossing and sprinted across the floating bridge as fast as I can. The cheers from the crowds were overpowering and goose bumps and all kinds of emotions completely overwhelmed me!!

Even though I did not win, it sure felt like the biggest victory of my life. With tears streaming down my cheeks, I was welcomed home by Christiaan, Christopher and my mum. All the hard work and many sacrifices, culminated into this one moment – it was all worth it!!

Without the Lords blessing on my build-up and on race day, this result would not have been. Also, a huge thanks to my partners K-Way, Biogen, Garmin & Adidas. Your values, professionalism and integrity as brands are undeniable and it is an absolute honor to be partnered with you.

Thank you my family and to each and every one of my supporters. You have stood by me through thick and thin, the good and the bad, the victories and the defeats. And for that I am forever grateful!